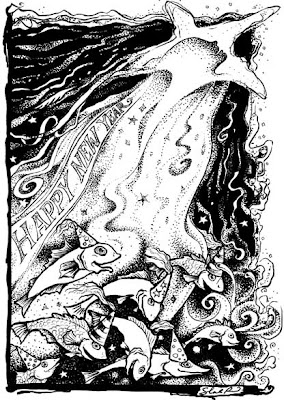 It's 2008 already. Wow how did that happen? Remember all that Y2K hype years ago? Seems like ancient history.
I had my belly dancing "debut" last night and it all went well-- I was nervous as heck at first, but then managed to settle in and enjoy it at bit. We had a full house with a lively audience, nobody fell off the stage, and no costume malfunctions (a la Janet Jackson), so I think it can be safely said the show was a success! Yippee! We spent the rest of our New Year's Eve having dinner with friends, then to see the fireworks at 9pm. Why fireworks at 9pm and not midnight? Beats me, maybe everyone else on this Island are old farts like us and go to bed before midnight (which we did, only to be woken up by a neighbor shooting off fireworks at midnight, so I guess they aren't old farts). Happy New Year everyone!
-Sheila
posted on Tuesday, January 01, 2008

hello Sheila & Omar, here we are Todd and Audrey in the netherlands. First of all it's great to see your work, second happy new year, belly dancing sounds great, we had fireworks at 12, 6 pm for you, ha ha even earlier. We hiked up a hill and looked over all the small villages were they all were shoothing off their fireworks to light the whole sky!

Hi Todd & Audrey- thanks for visiting our site. Sounds like you had a great New Year's. We're toying with the idea of visiting your country soon, we were there years ago and have been wanting to go back. This time we may be there horse shopping for a friend...