Earlier this week we returned home from attending Illuxcon 5 in Altoona, PA. Illuxcon is a small convention for illustrators and artists primarily working in the science fiction and fantasy field (but definitely not limited to just that).
So, being island-dwellers, all journeys for us start with a boat ride. We awoke bright and early Wednesday morning, packed the car and headed to the ferry. A Nor'easter was forecast to come in that day, but we had all fingers and toes crossed that we would be off the island before the winds got too strong and they had to start shutting down the ferry runs. We got the the boat, and found out our trip had been cancelled due to the winds (already!). They made no promises that any other boats would be going out that day, but put us in line anyways in case the next trip went out. We were lucky, the next boat made its run, and we were on it. Phew. We found out later that by the afternoon, all boats were cancelled and did not resume service until Friday morning. We were very lucky indeed.
By the time we reached Connecticut, it had started to snow. The roads were getting tricky, and the traffic was moving very slow. I wasn't complaining. Usually during the first snow people drive like idiots, but for once everyone was being cautious. We knew we had a loooooooooooong day ahead of us.

The drive took us five hours longer than usual, but was pretty much uneventful. The only real drama was when we left the highway to gas up the car and find a bathroom. For some reason the town we picked had no working rest rooms. We stopped in three different places, all had out-of-order loos for varying reasons. Finally found a fairly disgusting but working toilet at a convenience store. It very nearly tipped over when I pushed on the handle to flush it. And the sink was full of pine needles for some reason.
By the time we reached Altoona, the temperatures were warmer, the roads were dry, and there was no snow or rain or wind. Kinda like "what Nor'easter?".
Thursday morning we slept late, and then headed in to town to set up for the convention.
The next four days all kind of blur together. Lots of art, lots of artists, collectors and admirers of art. We sold, traded, bartered and talked shop. With a lot of goofing around as well.

For the past three years, Illuxcon has been giving out an award they call the Illie Award. Artwork is nominated and people vote for their favorite piece. Each year a different sculptor creates the actual award, and this year it was a latex mask made by Jordu Schell. We were very happy and surprised when we found out Omar had won this year! Woo hoo! Omar works so hard and it's nice to get the recognition, he is quite humbled by the whole experience. A huge thank you and smoochie smoochie to all who voted.
We had a little too much fun with "Illie", who now lives on our piano.
Illuxcon is always a good time. We know that dealing with artists is sometimes akin to herding cats, but we really appreciate all the hard work that Pat and Jeannie Wilshire do to put this show together. We are so looking forward to next year in the new venue when Illuxcon moves to Allentown. Let the madness continue! :) 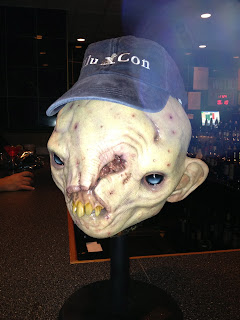 Looks like you had a great time! Thank goodnes you caught the Ferry when you did!
Congrats to Omar on the Illie ! That's the ugliest (coolest) award I have ever seen! LOL